Uganda’s Bwindi Impenetrable National Park is a sanctuary for half of the world’s remaining population of endangered mountain gorillas, alongside forest elephants and many other species. But two road projects are exposing fault lines between the park’s conservation mission and the needs of residents living nearby.

The Ministry of Works and Transport is finalizing designs for a new road that will cut through the park’s western edge. The ministry also plans to pave the Ruhija road, an existing path crossing the park’s eastern flank which becomes virtually unpassable during the rainy season.

Most conservationists don’t dispute the need for better roads in the region, but say they’re concerned about the impact on the park’s wildlife. They warn the roads could deny wildlife access to chunks of habitat and deepen the human footprint over a wider area.

“From a development angle, it’s such a small area, yet from a conservation perspective, it is huge,” Brian Atuheire, executive director of the NGO AIFE-Uganda, told Mongabay. “Implementing the road project could endanger the gorillas and destroy the gains made in their conservation.”

Bwindi, spanning 321 square kilometers (125 square miles), lies in the southwest corner of Uganda, hugging the country’s border with the Democratic Republic of Congo. There is also a designated nature reserve across the border.

Bwindi is home to the dense montane forests of the Albertine Rift and swaths of lowland forests, showcasing hundreds of tree and fern varieties as well as more than 300 species of birds and butterflies. The high-altitude woodland hosts around 450 mountain gorillas (Gorilla beringei beringei). Bwindi also marks the eastern edge of the critically endangered forest elephant’s (Loxodonta cyclotis) range.

According to a 2020 assessment by the IUCN, there are persistent tensions between local residents and park authorities over benefits from tourism and access to the protected area, which many people depend on for food and firewood.

But for many in neighboring communities, what’s of interest isn’t in the park but across from it.

Both of the proposed all-weather roads would improve transport between settlements in Kisoro and Kabale, south of the park, and those to the north, particularly in Kanungu district. To get to Kanungu at present requires traveling either along the unpaved Ruhija road through the forest on the east, or via a long detour around the western boundary of the park. This western route goes past near border areas of the eastern DRC, where a succession of armed groups have long operated, carrying out attacks on soldiers, civilians, and wildlife.

The government plans to build a surfaced road that cuts through the park for 3 kilometers (1.9 miles). 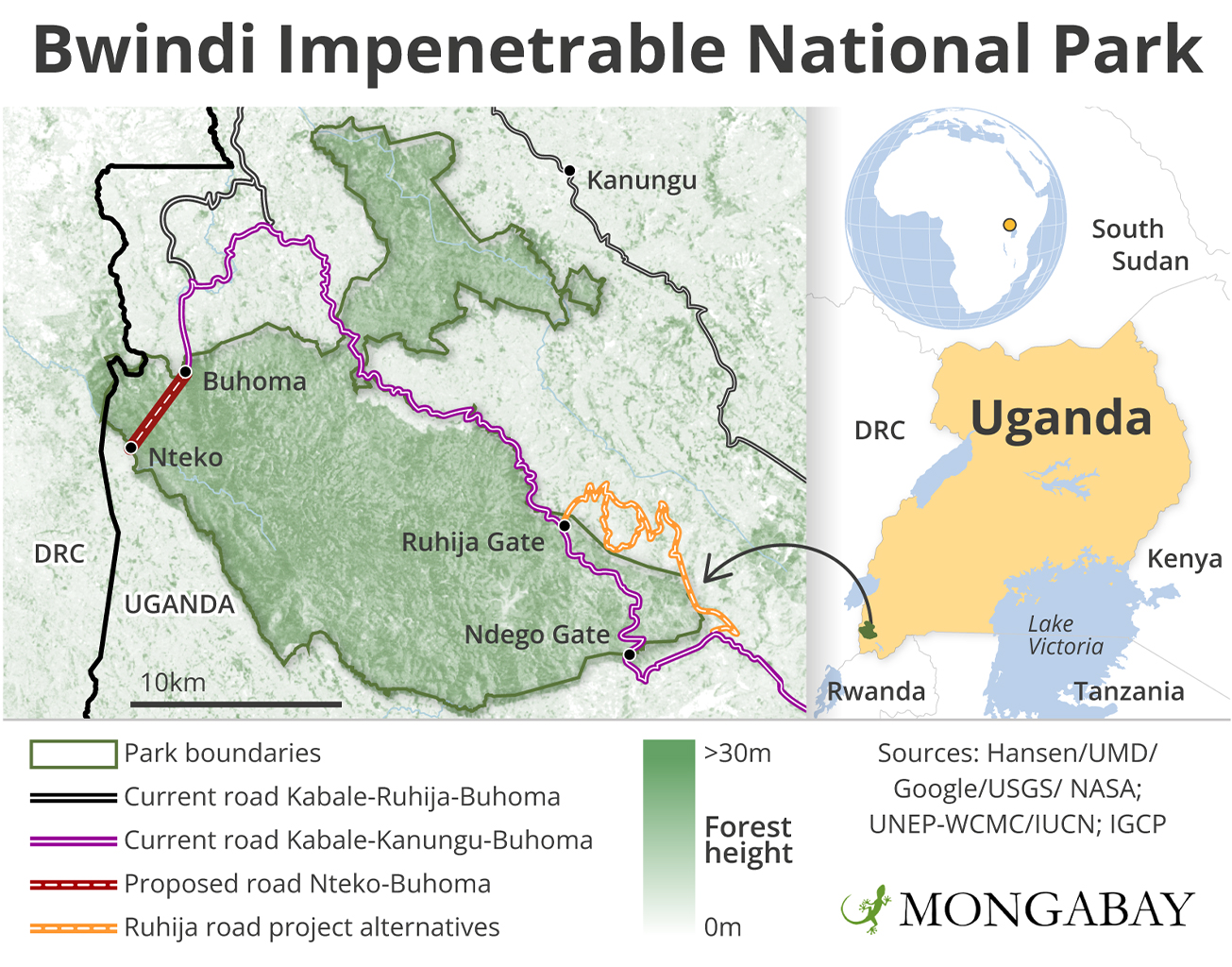 “The proposed new road will significantly impact connectivity of Bwindi Impenetrable National Park with the contiguous Sarambwe Nature Reserve in the neighboring Democratic Republic of Congo,” the International Gorilla Conservation Programme (IGCP) said in a statement. “This area is a known transboundary home range for the mountain gorillas, chimpanzees and other species.” The IGCP is a coalition of international conservation organizations that includes WWF and Conservation International, working in Uganda since 1991.

Nelson Guma, chief warden at Bwindi National Park Service, agrees. “There are issues of fragmentation of gorilla habitat, roads that dissect the habitat limit their range.”

Infrastructure projects in conservation areas pose a particular risk to ape populations, according to a 2018 report from the Arcus Foundation. By allowing easier access to hitherto remote areas, such developments can open up these areas to both increased poaching and agricultural expansion that eats into valuable habitat.

But the most immediate danger is from traffic accidents. The unpaved Ruhija road is frequented mainly by people on foot and on bicycles and only occasionally by cars and trucks. The risk of animals being struck is further lowered because motorists are forced to drive slowly due to the poor condition of the existing road.

Christine Ampumuza, a Ugandan researcher, investigated the controversy around the Ruhija road in Bwindi. “We don’t have a road, we have an animal track,” villagers from communities around the park told her. Others described the difficulties of negotiating a muddy, potholed road on a motorcycle to reach the nearest hospital. “Whenever we had a discussion, they always say: our women are dying. If someone is in labor, and you are delayed, anything can happen,” said Ampumuza, who studies tourism and conservation at Kabale University.

Until recently, there was no regular public transport. The private operators who provide such services were unwilling to bear the maintenance costs of running their vehicles on the route, said Ampumuza, who conducted her research between 2017 and 2019. Repairs to the worst stretches of the Ruhija road in recent years, have allowed regular public transport, enabling better access to health care facilities as well as schools and markets.

“All-season roads are a long-standing demand of the people here,” Ampumuza said.

The region’s road infrastructure problems hit national headlines in 2015 when Kizza Besigye, a political rival of Uganda’s president, Yoweri Museveni, got stuck on the Ruhija road and turned it into a campaign issue. Museveni himself has campaigned on building better roads.

The government committed to upgrading “tourism roads” as far back as 2012. The Uganda National Roads Authority (UNRA) identified roads around Bwindi, including the Ruhija road, for improvement. Bwindi is one of the country’s top tourist destinations, and bad roads were described as a major hurdle to realizing its full potential. “A guest does not pay more than 2,000 dollars for a gorilla viewing trip to break their backs on that bumpy road; they need a comfortable trip,” a tourism ministry official told Ampumuza during her research.

Yet a decade later, the Ruhija road remains unpaved. The UNRA blamed the wildlife authority, the UWA, for the delays, since the latter has opposed both of the road development projects. The wildlife agency works closely with the IGCP, a major supporter of conservation efforts in Bwindi. According to Ampumuza, the IGCP offered to help raise funds for an alternative road that would go around the park.

Road projects threaten integrity of Ugan...
Jane Goodall interview: ‘The most impo...
The Representer of Red Lips in 2021 Cann...